Have you ever wondered why they are called Sailfish? Well, many of you must have guessed it right. Yes, they are named after their spectacular sail-like cobalt blue colored dorsal fin that extends almost to the full length of their bodies and when stretched out it is taller than the width of the body. Talking further about their appearance the Sailfish have a distinctively rounded bill which is actually an extended upper jaw. The elongated body is usually silvery blue in color with brown spots on the belly.

Another amazing fact about the Sailfish is that they are the fastest swimmers of the marine world. Reaching up to 110 kms per hour, these magnificent sea creatures are one of the most sought after game fish. These Sailfish are not impressive just by their looks, but also by their fierce fights when they are encountered by the hooks and reels of adventure seeking anglers. Unlike many other billfish species, the Sailfish is not an endangered species. This is probably because their flesh is not a widely eaten and hence are caught very less by commercial fishermen. But their agility, speed, strength, stamina and acrobatics make them one of the most prized fish among sport fishermen.

Watch how the Sailfish feeds:

The Sailfish are saltwater species abundantly found in tropical and subtropical waters. Scientists have been debating over the existence of two subspecies of the Sailfish namely the Atlantic Sailfish and the Pacific Sailfish. The genetic difference between these two varieties of fish are negligible but the visible differences in their appearance have led to the belief that the Atlantic and the Pacific Sailfish are two different species. One of the marked difference between the two is that the Indo-Pacific Sailfish reaches larger sizes than their Atlantic counterparts. The largest of both Atlantic and Indo-Pacific species recorded by the IGFA are 64 and 100 kg respectively.

When and Where to find the Sailfish?

The Sailfish are abundant throughout the warm waters of the tropic and the subtropic. Depending on which species of the Sailfish you wish to see and catch the locations will vary.

The Atlantic Sailfish are abundant along the coastal subtropical and tropical waters. However  you can catch a glimpse of them occasionally along the Mediterranean Sea and the offshore waters of the temperate. If you look at their range across the west, their numbers are prolific along the Florida coast, the Caribbean Sea, the Brazilian coast and the Gulf of Mexico. The coast of Senegal to the Gulf of Guinea is the stretch in the east that holds a good population of the Atlantic Sailfish.

As for the Indo-Pacific Sailfish, they stick to their names and stay within the Indo-Pacific along both the temperate and tropical waters.
Of all these places, Guatemala is considered to be the best place to fish for these beautiful fish in the entire globe. Guatemala fishermen claim that on an average they get around 15 to 20 Sailfish bites and hence the place is rightfully called the Sailfish Capital of the world.

The table above lists out the 10 best Sailfish destinations of the world:

How to fish for Sailfish?

What can be more rewarding to a sportfishing angler than catching the fastest fish in the ocean. Anglers around the world use various techniques to catch Sailfish. Some of the most common techniques include trolling or drifting with artificial or live baits and fly fishing. 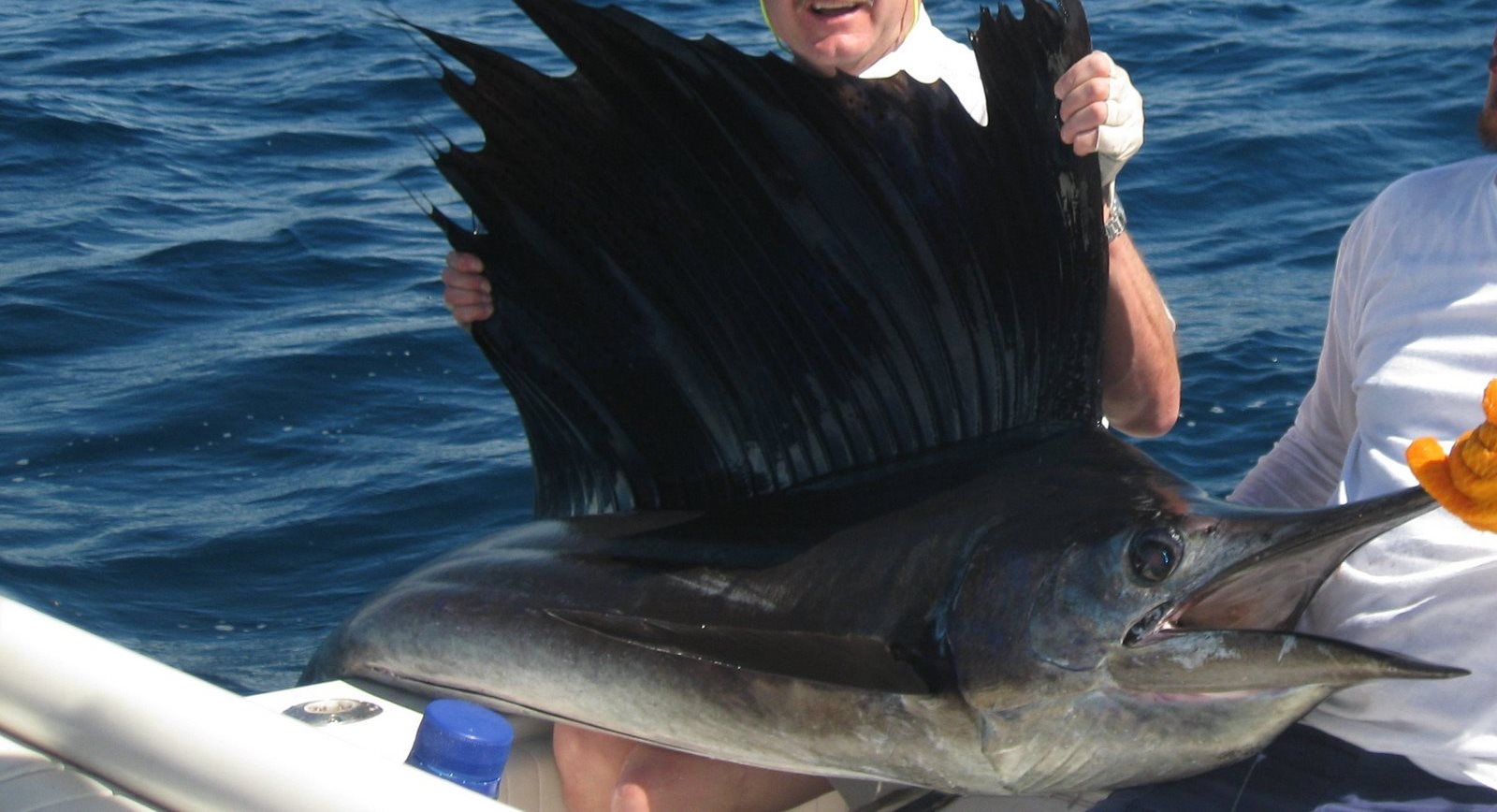 This is perhaps the most loved technique when it comes to landing a Sail. Determining the location of the fish is quite important. Once you have located fish at a certain depth it is very likely that more fish will be found in that range. Then you can possibly use a sea anchor and drift the place rather than power trolling as this will give you better results.

When live baiting for Sailfish certain captains suggest that you use a variety of baits. Ballyhoo is considered as one of the best baits for Sailfish along with threadfin herring, blue runners and pilchards. Sailfish like lively baits so if your baits slows down change it. 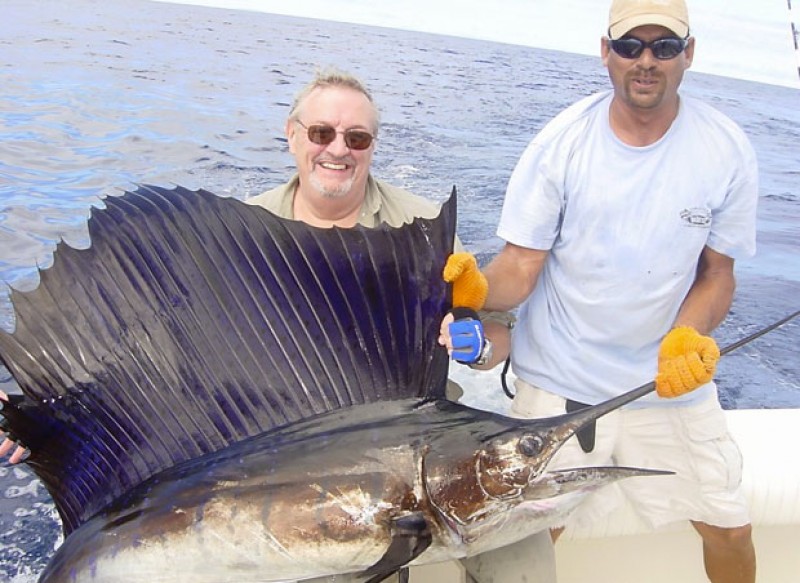 Sailfish are known to respond to artificial lures equally well. Thousands of Sailfish are landed using rigged and dead baits. These days anglers encourage the use of circle hooks instead of the J hooks because of the high mortality rate of released fish.

When fishing for Sailfish it is better to keep things simple. Using a light tackle is preferred over a heavy tackle. Using a live ballyhoo on the flat lines is always a better plan and skipping baits on the outriggers. The lines can be kept closer to the boat to keep a closer eye on the fish hooking on.

Fly fishing
Some anglers prefer fly fishing when catching the Sailfish. In destinations like Florida and Guatemala where the Sailfish populations are abundant this is one of the most common methods to land a Sail.
According to some of the professional captains the best way to hook a Sailfish is to have patience. One has to lure the fish close to the boat using a teaser and once the fish is within a few yards from the boat a fly is thrown behind the fish. This action compels the fish to turn and it thereby takes the fly along with it as it swims away from the boat.

Another simple trick that these experts suggest is not to try and hook the fish with the hand or the rod, instead hold the rod at 45 degrees from the fish and this will eventually hook the fish on its own as it tries to swim away. Simple! is it not? 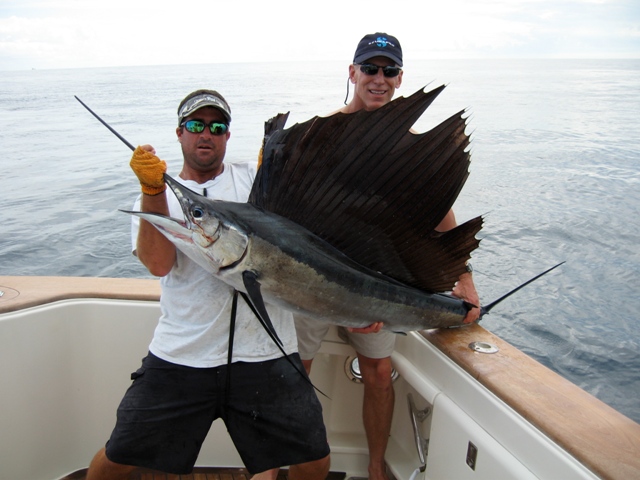 Our video selection of Sailfish fight:

How to book a fishing trip for Sailfish?

If you plan to land a Sailfish on your next fishing trip get in touch with the fishfishme team. Be it for a specific location you have in mind or if you are willing to travel to the destination where Sailfish are biting during your visit, we will assist you with getting in touch with the most professional charter guides and help you plan and fix your fishing trip.

All you have to do is go to www.fishfishme.com and select your dream destination and follow the instructions to book a fishing trip. If you are having difficulty in deciding the destination, shoot us a mail at support@fishfishme.com with your query.

We have over 3,000 happy customers from around the world and we cater to 50 different destinations around the globe. We know the best boats and  captains that can take you to one of the best fishing trips you will ever have.