If you are travelling to the middle east and if you are a fishing enthusiast or a person just looking to spend some quality time with your family or friends, then one of the best locations that you should check out is Oman. The Sultanate of Oman as it is popularly known is located such  that it is surrounded by the Arabian sea in its south and the Gulf of Oman on the north west. This geographical positioning of this Arab nation makes it a great destination for offshore fishing. With the entire southern and western regions engulfed with the ocean, Oman has numerous fishing grounds that will yield great numbers of game fish. Lets narrow down the locations and the fishing seasons of the various fishing spots in Oman.

Muscat: Muscat is perhaps the most popular city of Oman and it is a great fishing destination. With the deep waters of Gulf of Oman covering the northern and western borders of Muscat, you will get to fish for some of the most exquisite game fish here. The fishing charters usually leave from the Marina Bander Al Rowdah. 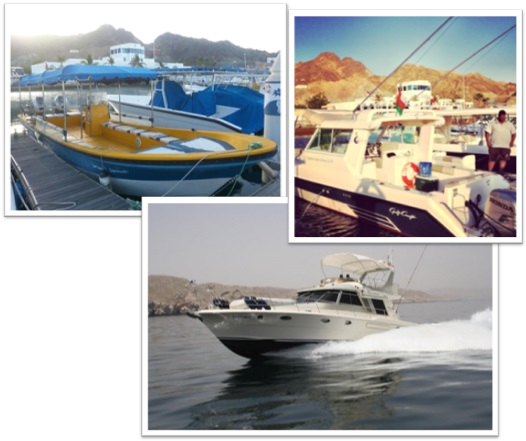 Some of our charter partners in Muscat

The fish that are most commonly targeted in the waters of Muscat are Yellowfin Tuna, Sailfish, Dorado Grouper and Kingfish. Fishing is quite productive all year through in Muscat, however if you are looking to fish for specific species, read on.

Season for the hard fighting Yellowfin Tuna begins with September and ends in May with an abundance in their sighting during November through March.

Sailfish on the other hand has a very lush season with ample sightings all through the year. So, if you are an ardent sailfish hunter, you know where to drop by.

The acrobatic Dorado is another most sought after fish in Muscat and these vibrant  fish are found all through the year. The Dorado season starts in May and extends up to January with a peak in the season during the months of August to October.

Grouper is one of the most favorite targets in Muscat and it is found in abundance all through the year with a slight decrease during March and July. 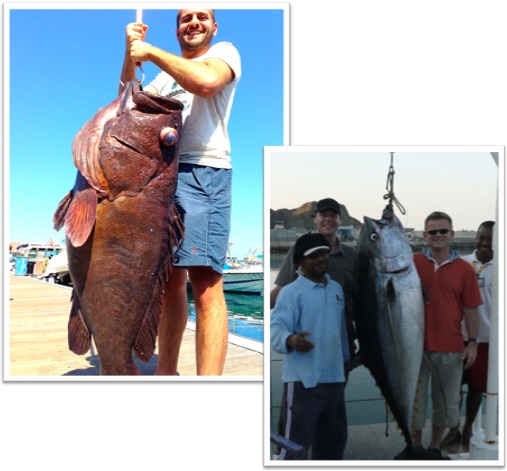 The fish caught from Muscat

One of our videos from fishing in Muscat

Salalah: This is one of the southernmost cities of Oman and has its entire southern border facing the Arabian Sea. With picturesque locations and a moderate climate, this city of Oman makes for one of the most sought after fishing destinations in the middle east. The targeted fish in Salalah include Trevally, Dorado, Yellowfin Tuna, Sailfish and the King Mackerel. Fishing season in Salalah is on all year through however, the monsoon time should be avoided as the  seas can be very rough. A species specific fishing season in Salalah looks somewhat like this:

Dorados are the prime fish in Salalah as their fishing season spans all year round in Salalah along with the King Mackerel. Next is the Trevally, the most lucrative time to fish for a Trevally is during October to April. September to March is the optimum time to fish for Yellowfin Tuna as they will be found in abundance during this time especially near floating objects. If you are visiting Salalah during the months spanning from February to April, then you are in time for some Sailfish action.

When fishfishme went fishing in Salalah 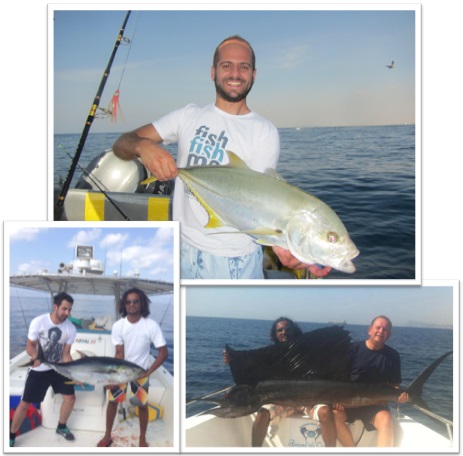 The catches from Salalah

You can view and book the fishing charters in Salalah here

Quriyat: This popular destination on the way to Muscat is a fishing village in itself. The western border of Quriyat faces the Gulf of Oman and thus gains access to lush fishing grounds. The fish species that are found in this part of Oman includes Yellowfin Tuna, Dorado, Grouper and Sailfish. Like the above mentioned cities, fishing in Quriyat is very productive throughout the year.

As you can see from the chart below that the fishing season in Quriyat is very similar to that of Muscat with the Grouper taking the lead in being found all through the year in great numbers. Sailfish is one of the consistent catch with a moderate sighting of these fish every month. The Dorado season ranges from May to January with the most number of sighting and catches in the three months starting in August and ending in October. Last but not the least, the Yellowfin Tuna fishing season is at its best from November to January with moderate sighting in all the other months.

Khasab:  The capital of Musandam, Khasab is situated to the extreme north of Oman and it has its borders in UAE and the Gulf of Oman and the Arabian Gulf. With the waters of these two water bodies merging here, Khasab has a rich variety of marine life. Not only is this place noted for its rich marine life but it is very well known for the beautiful locations and its scenic beauty. 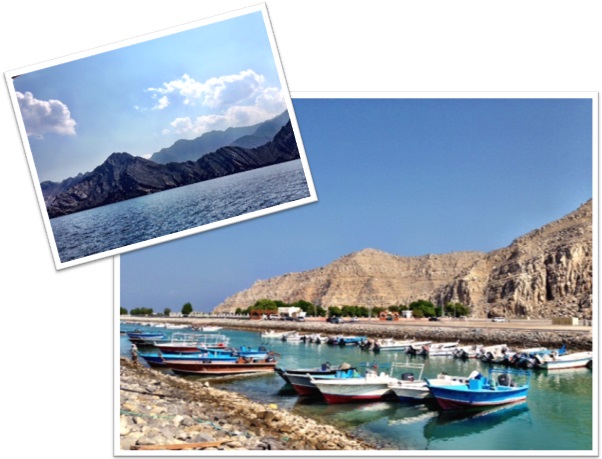 The marina in Khasab

You can find the fishing charters operating in Khasab here

Shuwaymiyah: This is an island on the southern coast of Oman and is the best place to go to as it is considered one of the best fishing destinations in the world for GT . From September through May the fishing season of GT is on in Shuwaymiyah. Other fish that are found during this same period are the Grouper, Dorado, and Queenfish. The months of June, July and August are the only three months in the whole of the year when you might find the fishing to be a little sluggish, but you can be sure to have a catch of some kind any time of the year though. 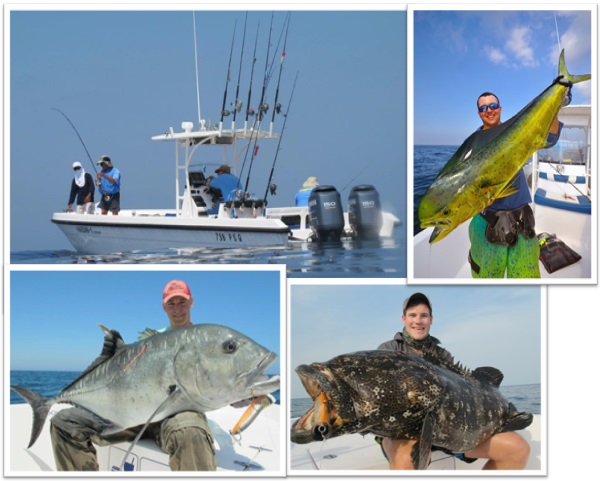 Masirah: Masirah is yet another island on the southern coast of Oman and is surrounded by the Arabian Sea and is considered to be one of the best locations for sport fishing in the Arabian Gulf. The best time for sport fishermen to visit Masirah is during the months spanning from October to March. This is the time when the weather is perfect and the waters are abundant in marine life. Other than sport fishing you can also indulge in snorkelling and diving. You can also go turtle watching as Masirah is known for its turtle population.

To view and book fishing charters in Masirah click here.

Hasik: Hasik is an island village not to far from Salalah. The best times to go fishing in Hasik is from September to Mid-December, March and April is also a good time for fishing but make sure to avoid the months of May to August as this is the monsoon season and the seas can be quite turbulent during this time.

Giant Trevally is one of the best attractions of Hasik sportfishing. This magnificent fish can be found in the waters of Hasik from mid September to the end of April. Bluefish is the most abundantly found fish in Hasik and the best time to go fishing for Bluefish is during the months of September through November. If the yummy grouper is what you are after then you should visit Hasik between the months of September and April. Another of the popular fish in Oman and specially in the island of Hasik is the Job fish also known as Andeq. This fast and strong fish is a good sportfish that will hold up its end of the bargain in putting putting up a good fight. Best time to reel in a Job fish is during September through March wherein October turns out to be the best of all months. 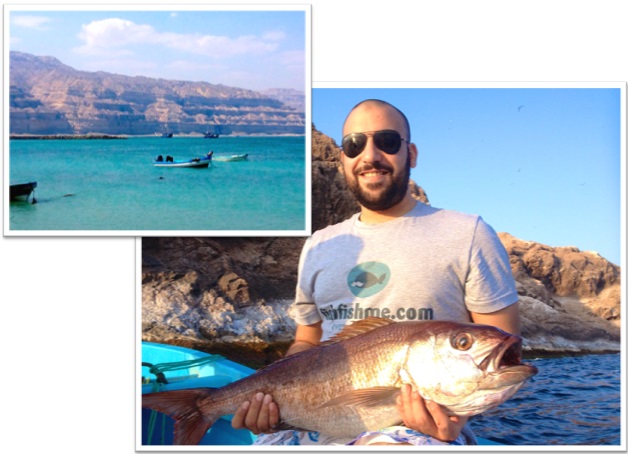 Hasik and the Job Fish

If you are looking for charter boats in Hasik, Click here

Dibba: Located on the northern end of Oman and sharing borders with UAE and the Gulf of Oman, Dibba is purely a great destination for sport fishing enthusiasts. The waters in Dibba are full of fish of a wide variety. You can fish for great sport fish like the Giant Trevally to Yellowfin Tuna to the Emperor Bream also known as Sherri. The fishing season in Dibba is effectively all through the year with slightly better conditions during the first half of the year generally from February to March. If you check the chart below you can see that all the fish are sighted almost every month and the best season for all these species sum up to the first four months from February to March. 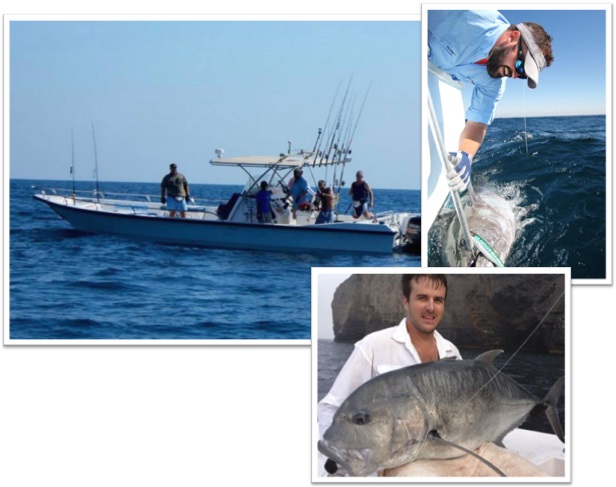 You can book your fishing charter to Dibba here.

Hadbeen Village: If you are looking for a traditional fishing experience in Oman then Hadbeen Village is the place to be. Handline fishing is the most popular method of fishing that is practised here. To book your fishing charter in Hadbeen Village click here. 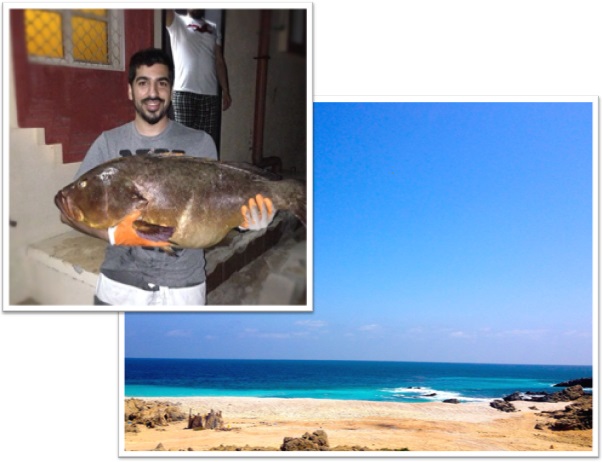 Huge grouper and the Hadbeen waters

You can visit www.fishfishme.com to book your fishing trips to any part of the world.

One thought on “Best Fishing Season in Oman”