Louisiana is  one of the southernmost states of America and is bordered by the Gulf of Mexico in the south. Fishing enthusiasts from all over the world flock to this great location for big game fishing as the fishing season is open almost all through the year and there is a great variety of fish species in these waters. Let’s take a quick look at some of the most sought after fish species in the Louisiana waters. 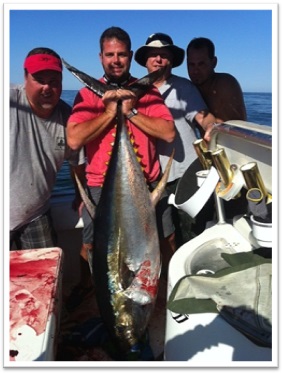 The Yellowfin Tuna has always been one of the most favourite game fish of anglers around the world. And why wouldn’t it be?, this fish is renowned for its speed and strength, two qualities that are symbolic of big game fish. Louisiana is one of the best spots for Tuna fishing as it offers opportunity to reel in a Tuna all through the year unlike many of the fishing destinations around the world. Though the Yellowfin are found off the coast of Louisiana all year through during the winter months they are found in plenty at the midnight lump.

Midnight lump is the salt dome called the Sackett Bank that is located 50 miles off the Venice coast and is 21 miles away from the mouth of the Mississippi River. This place has earned high acclaim during the recent times for the abundance of marine life around it. This spot is said to have produced the majority of the biggest Yellowfin Tuna caught off the Louisiana coast. The largest caught here weighed around 108.9 kg.

Where to find Yellowfin Tuna in Louisiana:

During the warmer months Yellowfin Tuna is found throughout the Gulf of Mexico. Some of the most visited spots in Louisiana for Yellowfin Tuna are Venice, Grand Isle and Port Fourchon.

The most common fishing techniques used in and around Louisiana to land a Yellowfin are live baiting, chumming, vertical jigging, deep trolling and trolling to name a few. 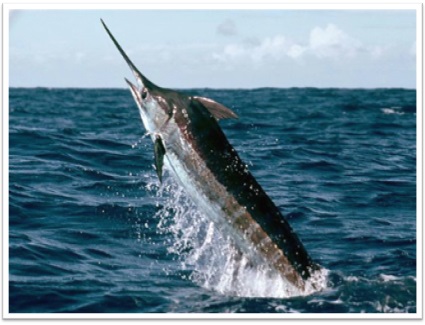 Marlins are hard fighting fish, and that is why experienced anglers say that when fishing for Marlins you have to be ready for the fight of your life. This is because the Marlins are big and strong and have a strong will to fight till the end. These traits of the Marlin make it a highly sought after fish in the sport fishing realm. When a Marlin gets hooked they instinctively leap out of the water vigorously shaking their heads and abruptly changing their direction in water, all in an effort to unhook themselves.

Where to find Blue Marlin in Louisiana:

In Louisiana, the best time to go on Marlin fishing is during the summer months that extend from May to July. Since Marlins like to be in deep waters, to spot them, fishing charters usually travel to 15 to 100 miles off the Louisiana coast. Here these fish can be spotted on the water surface as they swim near weed lines. The usual catches range from 68 to 136 kg on an average. In Louisiana, Port Fourchon, Grand Isle and Venice are the three most frequented spots for Marlins. One of the largest Marlins caught from Louisiana has been recorded to weigh 522 kg, this specimen was caught from around 30 miles south of the South Pass.

Lures and live baits are both used to lure and land a Marlin. 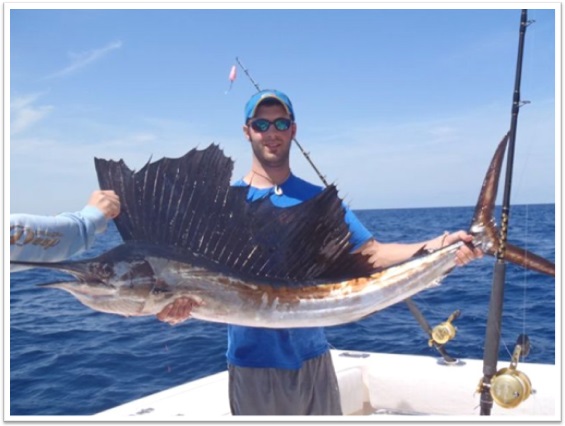 The Sailfish, also categorised as a billfish is yet another highly sought after game fish by sport fishing anglers all around the world. The Sailfish are extremely fast and are known to be very stealthy in the water and these characteristics have made them one of the most sought after game fish. The pointed bill and the elongated dorsal fin makes them easy to identify from all the other billfish. These fish are found in both nearshore and offshore waters where the water is clear and the salinity of the water is optimum. 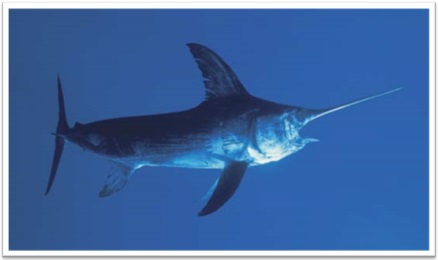 The Swordfish, also known as the broadbill is an aggressive predatory fish that is known for its strength and speed. Anglers all over the world consider reeling a swordfish an experience of a lifetime. The bill of the Swordfish is flat unlike the rounded bill of Marlins and other billfish. These fish like to feed from the top of the water column but are very rarely spotted on the water surface.

Where to find Swordfish in Louisiana:

In Louisiana, Swordfish are found in the Gulf of Mexico by the Mississippi River Delta.

The usual technique used to reel in a Swordfish is by using dead or live baits. 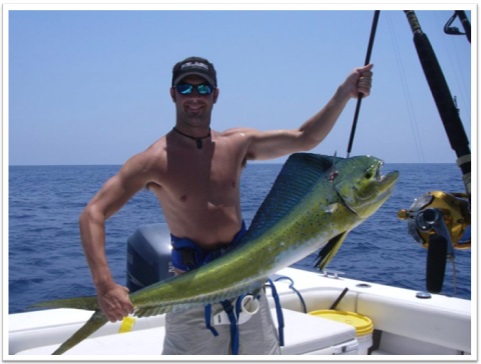 The Dolphin fish is also known as Dorado or Mahi Mahi. The Dorado is popular for its vibrant appearance, its flesh and in the sporting realm for its aerial acrobatics and fighting ability. Once a Mahi Mahi gets hooked to your rod it will put up a good fight and try to free itself by doing tail-walks and by leaping out of the water multiple times. These acrobatics make the Dolphin fish a favourite among sport fishing anglers. Another interesting fact about the Dorado is that they swim in schools, so when you spot one it is easy to spot more for your sport.

Where to find Dorado in Louisiana:

When in Louisiana, May to June is the season when the Dorado are found in abundance and it is during this period that they are the most sought after. These fish are often found off the Venice coast and are located 12 to 60 miles off the coast. Other than Venice, the Dorado is also found in plenty of numbers off the coasts of Port Fourchon and Grand Isle. The Dorados caught off the coast of Louisiana usually weighs to an average weight that ranges from 4.5 to 10 kg. The state record of the largest Dorado caught in 1993 weighed some 13 kg.

The most common fishing technique that is advocated to catch a Dolphin fish is trolling. Baits that are used ranges from live baits to skirted baits. 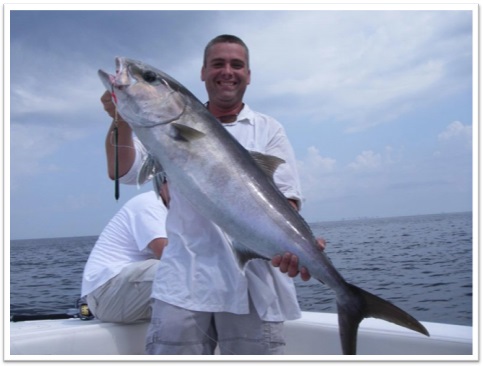 Next on the list is the Amberjack. This is yet another fish that has gained acclaim as a reputed game fish for its powerful pulls and mighty fights. It is quite common for an angler to be worn out after landing an Amberjack as these powerful fish exhibit great strength and stamina.

Where to find Amberjack in Louisiana:

In the Gulf of Mexico the Amberjacks are usually found towards the north near the reefs, wrecks, sand domes, artificial reefs and are also found around the oil and gas rigs. A greater concentration of Amberjacks are found waters ranging from 120 to 130 feet. The Greater Amberjacks can grow up to 78 kg, however the commonly caught Amberjacks range between 9 to 22 kg.

When reeling for Amberjacks, anglers advise to use heavy tackle because these jacks are known to cut the line easily by pulling it through nearby underwater structures.
Fishing Technique:

The best way to catch an Amberjack is by using live bait. The most common bait that is used around the Louisiana coast is the blue runner which is commonly known as the hardtail. Amberjacks love to feed on them and hence are the best bait to reel in an Amberjack from the Gulf of Mexico. Grunts, mullets, spots and pinfish also fall under the Amberjack’s menu. 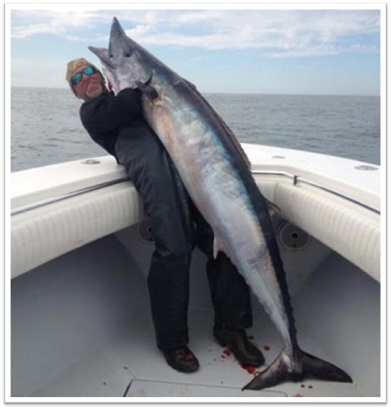 The Wahoo is often mistaken for a Mackerel by many newbie fishermen. The similarities in their appearance leads to this confusion. The Wahoo is known by different names like Pacific Kingfish, Oahu, Ocean Barracuda and Ono around the world. These fast paced fish are quite challenging to catch as they do not swim in schools. Moreover, their strength, fighting nature and fast runs have made them one of the prized big game fishes.

Where to find Wahoo in Louisiana:

In the Gulf of Mexico, the Wahoo is spotted and caught in great numbers off the coast of Louisiana towards the north of the Gulf waters. Here, the best months for catching a Wahoo have been proven to be the months of January, February and June. The Wahoo can grow to weigh 83 kg however, the average catches from the Louisiana waters ranges anywhere between 13 to 40 kg. 15 to 30 miles off the coast of Venice has been found to be one of the best spots for Wahoo fishing in the Gulf of Mexico. Here, Wahoo is often found swimming about the weedlines near the oil rigs and other manmade platforms.

Surface trolling using lures is one of the most common methods that is used to catch a Wahoo in the waters of the Gulf of Mexico. Surface trolling is used because Wahoo are usually spotted anywhere between 2 to 500 feet below the water surface. 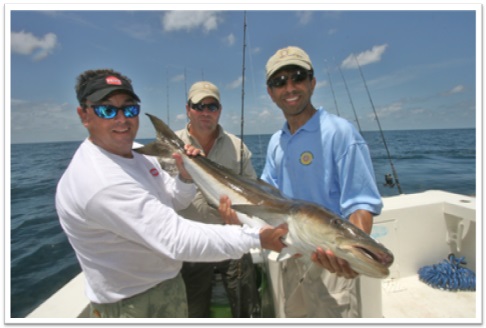 Cobia is a strong fish that is very exciting to reel in. As the Cobia gets hooked it will set off on a fast run that will reel out most of the line and that is when the fun begins. Their speed in the water and the taste of their flesh make them renowned in the sport fishing world. Cobia are known by several names like lemonfish, black salmon, cobio, sergeant fish, black runner, ling etc.

Where to find Cobia in Louisiana:

Cobia are found all through the Gulf of Mexico. Along the Louisiana coast they are known to be found off the Venice coast usually in waters with high salinity. Cobia have been spotted in surface waters and even in waters as deep as 250 feet. The usual Cobia catches can range from 22 to 45 kg. Cobia are said to be found in these Gulf waters all through the year but the spring time is known to be the best time for Cobia fishing as this is the time that they migrate from the South Florida to the Gulf and the Atlantic.

In the Louisiana coast the most practised technique is live baiting however, some anglers state that they have caught Cobia on a Bonito fillet bait as well.

To book your fishing trip in Louisiana click here.