The Blue Marlin is by far the most sought after game fish by sport fishermen all over the world. These magnificent creatures known for their relentless fighting power, speed and aerial acrobatics are easily distinguishable from other species of fish. They have an elongated upper jaw that resembles a spear which is used by the fish to protect itself from predators and to stun its prey. Once a Marlin is hooked it will put up a fight that can last for hours. Experienced anglers who have studied all the moves of the fish will try and compel the fish to react and behave in certain ways that makes it easier to overpower and land the fish.

The Blue Marlin is the biggest fish of the bill-fish family. It can grow up to lengths of 5 m and weights of about 820 kg. The largest Blue Marlin recorded by the IGFA weighed a humongous 636 kg.

Where and When to find a Blue Marlin 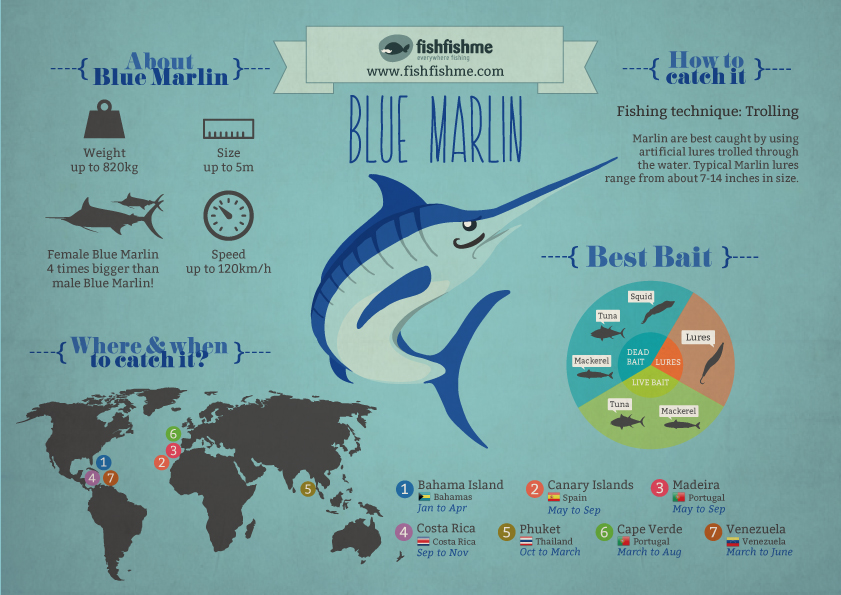 The Blue Marlin is usually found in the warmer waters of the tropical and temperate Atlantic and the Indo-Pacific oceans. Though the Marlin has been found in temperatures ranging from 21 to 30 degree Celsius, they are found in abundance in the warm waters of about 24 degree Celsius. They prefer to hang around weed-lines and areas where sub-surface structures and seamounts create upwellings and current and are seldom found in shallow coastal waters.

The best places and the best time to go looking for a Blue Marlin are as follows:

[maxbutton id=”4″] These highly migratory species are found to move to the equator during the winters and swim away during the summer months. Once you decide on your fishing destination you can choose to opt for the best charter company in the location by browsing through the fishfishme website. You can read more about the captain and his crew from the captain profile and decide to go with the best.