The Marlins are probably every sport fishing angler’s dream fish. Nothing can get better than standing on board your boat holding a beautiful creature such as the Marlin that gave you such a fight that your entire body feels battered. Sport fishermen all around the world go in search of these magnificently beautiful fish that are both strong and huge.

Of all the Marlins the Striped Marlin has always fascinated me. This beautiful fish is one of the rare beauties in the marine world. With vibrant stripes that can change color when excited for example when feeding. The otherwise blue stripes will change color to a luminous blue or a shiny lavender. These fish when they die also develop distinct stripes along the sides of their body.

Talking about Striped Marlin, I recently happened to read an edition of the Marlin Mag and came across this highly informative article on Marlins. Couldn’t be without sharing this piece of information with you guys. If you love fishing you should definitely know that the Marlin is considered to be one of the best game fishes owing to their spectacular speeds and aerial acrobatics.

Many anglers, even after multiple fishing expeditions can find it difficult to distinguish a Striped Marlin from a Blue. This is because Blue Marlins also have subdued stripes on their body that can confuse anglers most of the time. So when a Marlin pops up the surface of the water with its amazing agility and bright glistening blue body, how do you know if it a Stripey and not a small Blue Marlin? 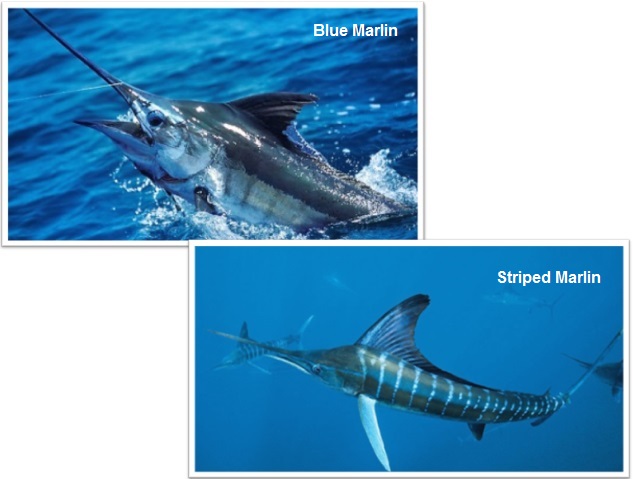 According to the experts at Marlin Mag there are three very important aspects that can be considered to distinguish a Blue Marlin from a Striped Marlin and they are:

The final feature that clearly distinguishes both the Marlin species from each other is the shape of the jaw. The Blue Marlin has a short and broad lower jaw whereas the Striped Marlin’s lower jaw is narrower and pointed.

Now you know how to differentiate between these two Marlin species. So, next time a Marlin shows itself in the duration of your fishing trip you can be sure to spot the right one without confusion. And thus you can outshine your fellow anglers and be the knowledgeable one among the lot.

To book charter boats to Cabo San Lucas you can click here.