The fishfishme team set  forth on a trip to Fujairah on a Wednesday afternoon to try their luck at fishing and to have some team time in the ocean.

We arrived in Fujairah slightly after 1.30 pm. Soon after we reached, we completed the paperwork and met Captain Calvin and Robbie at the dock where they were waiting for us by their boat Yellowfin. They were very cordial and were more than happy to explain to us about the various aspects of planning that they had to do before setting forth on a fishing trip. 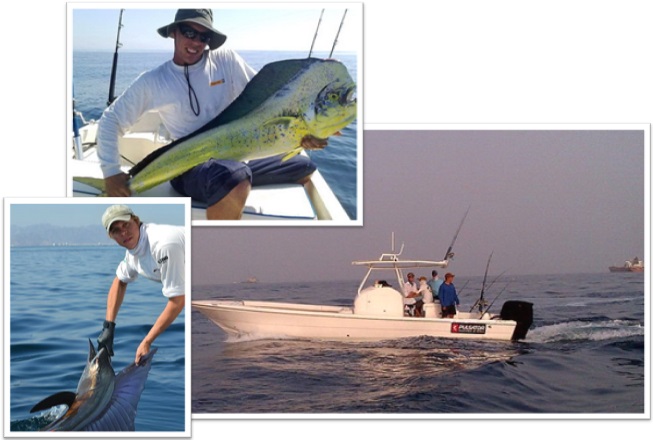 Captain Calvin and Yellowfin in Fujairah

Calvin went on to telling us that they have to keep a close watch on the weather conditions such as the wind speeds, the wave heights and the like to ensure that fishing is feasible on a certain day. The winds and the waves play a very important role on a fishing trip. According to our captain if the wind speeds exceed a certain limit (27 to 33 kph and above to be more precise) it can be quite rough out in the ocean and balancing a boat and ensuring the safety of everyone on board can become a concern. He also mentioned that during strong winds, keeping the line and the rod steady will also be not possible. When asked about the waves, we were told that waves that were bigger than 3 feet were considered not good for fishing. However, we got to learn that underwater current is actually essential for certain species of fish like the Amberjack (we had thought otherwise).

Before setting out into the ocean, Captain Calvin and Robbie gave us a safety briefing explaining to us the various things we should keep in mind while we are at the sea and while fishing. He also ensured that the life jackets and the first aid kit were kept in easily accessible places in the boat.

Then we set off into the beautiful waters of the Gulf of Oman. Just as we spent some 15 minutes into the sea Captain Calvin brought to our notice that the color of the water had changed to a reddish brown color. He later explained to us that this is a phenomenon called the red tide when algae bloom and accumulate in the water column. This is a natural phenomenon and when this happens sometimes it tends to affect the marine life as these algal blooms tend to deplete the dissolved oxygen in the water and thus depriving the fish of oxygen and leading to the dying of fish that usually washes up to the shore in large numbers. We stopped by this area affected by the red tide and noticed that the water was murky and it had a lot of dust like particles in it. Calvin told us that fish do not prefer to swim in such muddy water and hence during algal blooms of this nature fishing becomes sluggish.

We then moved away from the red tide and rode in the boat for another 10 minutes and reached a congregation of tankers anchored into the ocean. This was some 7 miles (11 km) away from shore. We were then told that this is a good place to look for our targeted fish as these tankers stay in one place for months together and attract a lot of fish to hang around them. We could see a lot of bait fish swimming and leaping from near some of these tankers.

We watched as Calvin and Robbie went on to tie spoons on to the line. We tried various fishing methods out there in those waters. 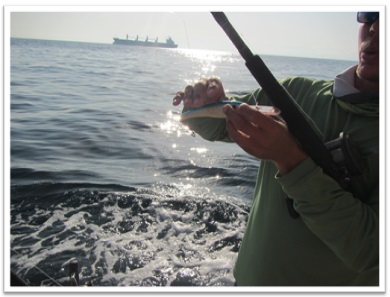 Captain Calvin tying the spoon to the rod

First, we tried jigging, this is considered one of the most difficult of the fishing methods. Here you imitate a whipping motion with the rod to attract the fish from under the water. The spoon was cast out into the water to a certain distance and then with a whipping action the line is reeled in. The captain explained to us that this method is used to catch Dorados and Tuna. We cast out the line a few more times and when fish did not bite we tried to check for some other locations beside other tankers as well but were disappointed when we could not get the fish to bite. The sonar on the boat showed that fish were present where we had halted but still could not get the fish to bite.

We then moved further into the ocean and tried some popping with some poppers. Captain Calvin described this method in detail and told us that the poppers used in this method have a blunt face and are hollow inside. This allows the popper to stay on the water surface and when it is reeled in it will create a popping sound that will attract fish species like the Trevally, Tuna, Dorado, Rainbow runners and Bonitos. 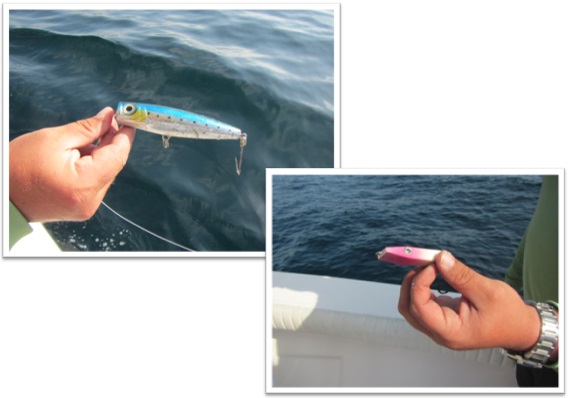 Captain Calvin says he likes to use a single hook as there is a greater possibility of the fish getting hooked in the mouth and that there are far lesser chance of losing the fish when it gets hooked by the mouth than by any other part of its body. He also mentioned that Popping is more productive when fish are spotted on the water surface and not otherwise.

Since we did not spot any fish on the surface, this method did not get us any fish either.

Live baiting is what we tried next. We got a live bait from the bait pool that Robbie and Calvin had kept caught before we arrived. Then Calvin explained to us that he prefers hooking the bait fish on the rear end about a few cms away from the tail so that when the fish is let into the water it can move freely and thus attract its predator. Live baiting is also the most popular fishing technique that is a favorite among most anglers.

Unfortunately live baiting also did not get us any luck with our fishing, Calvin had told us before we set out that they have had a bad week at fishing that week, I guess we did not take that too seriously until then.

We then got hold of the trolling rod to try our luck with Calvin’s favorite fishing method. Though trolling was Captain Calvin’s favorite fishing technique as it allowed him to cover a larger fishing ground he told us that it was the less liked method by most of his clients. This was because most anglers get bored when they sit idle in the boat waiting for the fish to bite. But Calvin says, this is a great technique to catch big game fish and that it is only until the fish bites and then whole hell breaks loose.

By 4 we were all tired of the anticipation and decided to call it a day. Though we couldn’t catch any fish we got a lot to learn from Calvin and Robbie. They went on explaining to us the differences and benefits of each rod, reel and bait used for each technique. We wouldn’t call it a bad day at all. Last but not the least, if you are looking forward to a fishing trip in Fujairah and you are looking for an experienced and knowledgeable captain, then Yellowfin and Captain Calvin are the ones you can count on. To book your fishing trip with them click here.