I am sure there would be a long list of fishermen where each would boast of being the best fisherman in the world. With careful research and screening we at fishfishme.com have created a list of the best fishermen of all times from around the world.

This American author and journalist might have earned repute with his writing skills but you should also know that a list of famous fishermen cannot be complete without his name. As per the famous legend Hemingway took to fishing as early as when he turned 3. He began his affair with fishing since then and ventured into deep sea fishing in his early 30s. He has spent many hours fishing in Florida Keys.

From the deck of ‘Pilar’ Hemingway landed one of the largest Marlins of all times weighing almost 533 kg. In an an interview quite some years ago, Hemingway’s son is heard saying that the happiest days that his father spent was on the boat that he made with his own hands. Hemingway has also said to have won every organised fishing contest put on Key West, Havana and Bimini during the days he spent in the Caribbean. Hemingway was named the Vice President of the IGFA (International Game Fish Association). Hemingway through his literary works taught about fishing and inspired a large audience that had no idea about angling whatsoever. 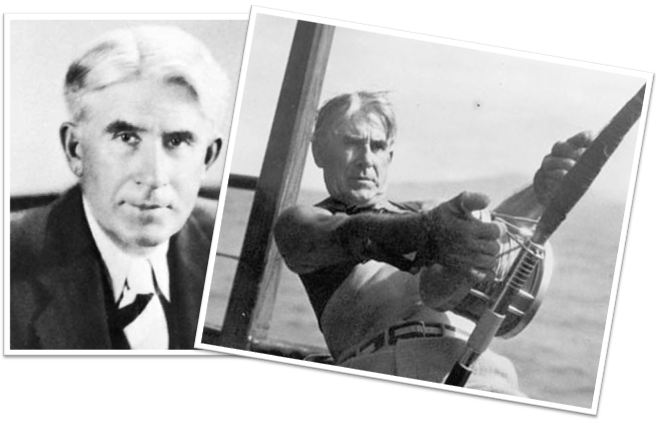 Pearl Zane Grey is better known as the American author who penned novels and stories that presented images of the American Frontier. Many might not know of Grey’s exploits as a pioneering angler. He is a one-time holder of over a dozen saltwater records. For his pursuits and contributions to the recreational fishing world Zane Grey has been inducted to the hall of fame of the IGFA. Grey began fishing as a small boy in the river Muskingum and went on the pursue his dream of fishing the saltwater after 1910. He was the first fisherman to snag a Pacific Blue Marlin that weighed around 471 kg on a rod and reel.

Grey went on to master the methods to catch the broadbill swordfish that is very elusive in nature. Zane Grey was a champion in reeling a sailfish using the tight tackle. Grey spent a lot of his time, energy and resources for his passion of fishing that led Ed Zern to write about Grey as, “No other man … has devoted so much of his fortune, or so large a share of his time and energy, to the catching of fish for the sport of it.” 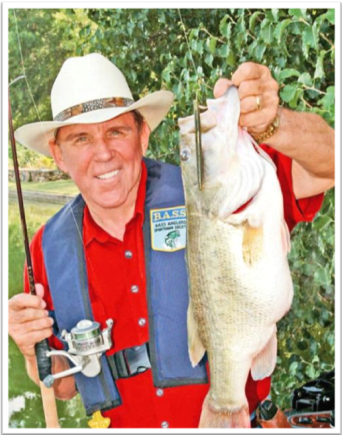 Ray Scott is synonymous with B.A.S.S (Bass Anglers Sportsman Society). He is the man who changed recreational fishing into a multi-billion dollar industry by featuring the sport on tv every weekend. After B.A.S.S was formed in 1967 now it has grown to largest fishing organization in the world with over 600,000 members. Not only that Ray also introduced the BASSMASTERS television show that gave us the joy of watching the bass tournaments from our living rooms. As the sport began to grow its fame the black bass turned into world’s favorite game fish. Field and Stream magazine named Ray as one of the “Twenty Who Have Made a Difference” in the American outdoors over the past century and the formation of B.A.S.S is counted as one of the top innovations in fishing. Ray Scott fathered the modern-day bass angling and hence has been honored by the IGFA by inducting him to the hall of fame. 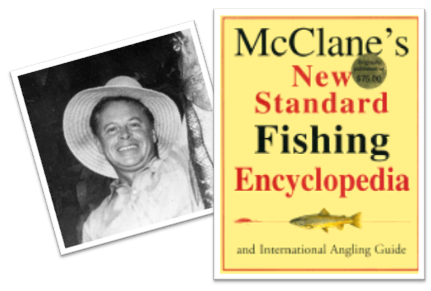 Al McClane is undoubtedly one whose scope and depth of knowledge in fishing is still considered unmatched. He not only knew everything under the sun when it came to fishing but he also shared his encyclopedic knowledge with others through amusing and captivating prose. He has been the fishing editor of Field and Stream Magazine for over 40 years. Because of his authority in the matters of angling, cooking and story telling he was often asked to accompany royalties, celebrities and men of the state for fishing trips.

His literary works have enriched the sport of angling with its entertainment and its in depth knowledge. His name lives forward with his masterpiece work of the McClane’s Standard Fishing Encyclopedia. This is another celebrated life in the archives of the IGFA hall of fame. 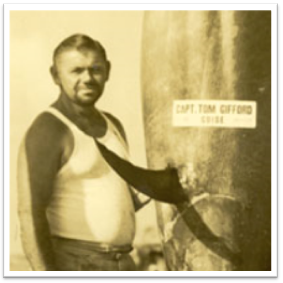 Popularly known as Tommy Gifford, he is the best skipper you can ask for when it comes to bluewater big-game angling. Gifford gained reputation as one of the inventive of the bluewater angler ever lived. His constant innovativeness led to his charter catching record fish every time. He garnered an encyclopedic knowledge of game fish and the methods to catch each one of them. It was Gifford’s creative thinking that has led use of equipments like the flying gaff and the star drag reel in saltwater fishing. This man never lost his zest for the ocean and the creatures beneath the water and this is one of the reasons that led Raymond Camp to write, “Big game angling has a brief history, but Tommy Gifford’s name is sharply etched on every page.” 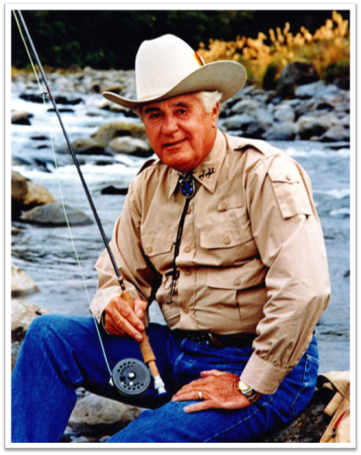 Curt Gowdy, the legend of sports announcing spearheaded the creation of the first fishing show on television, “The American Sportsman”. His career in announcing and his passion in fishing were closely intertwined. Gowdy learned saltwater fly-fishing while he was a Yankees announcer. He used to accompany the team to various training camps thus picked up tarpon and snook fishing when he was with Red Sox in Sarasota. When the idea of outdoors fishing show was rejected as it was not a competitive game, Gowdy came up with the idea of a fishing tournament and thus began the American Sportsman. Gowdy later on hosted over 200 episodes, travelling with celebrities to the best fishing locations all over the world to hunt and catch fish. He is probably the only man in the history of mankind to be included in eight hall of fames including the one with IGFA.

Michael Lerner is by far one of the greatest anglers of the early times who is immortalised by his scientific contributions to the sport of fishing. He founded the International Game Fish Association and along with his wife fished for Marlins and Swordfish off the coasts of Bimini, Chile, Australia, Peru and Nova Scotia. He and his wife Helen organized and financed fishing expeditions that included scientists from the American Museum. The knowledge and understanding gained from these expeditions broke new grounds in of scientific understanding of saltwater game fish and they became valuable resource to anglers, conservationists and scholars from around the world.

Lerner was awarded numerous international awards for his deep and broad commitments and contributions to the angling world. The IGFA has recognised his contributions by inducting him to their hall of fame along with many other eminent personalities of the fishing world. 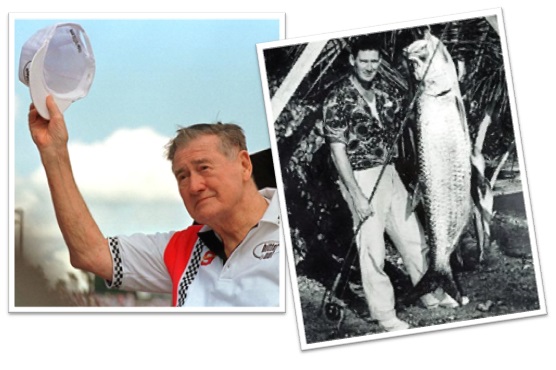 Theodore Williams is popularly known as Ted Williams. He is one of the legends in the history of baseball and has left a trail of his legend as one of the finest anglers of all times of both the freshwater and saltwater. It was the warm water of the Atlantic that made Ted fall in love with fishing. His passion for fishing that began during his war days drove him to learn almost everything about fishing from tying all kinds of fly to even the habits of fish and finally to the science and strategy of casting. He was determined to be the best and hence he consulted experts and practised for hours. Ted fished the Florida Keys throughout the year and caught 1000s of each species, but he kept only a few. He stated that “Releasing a great fish is the greatest thrill I get from fishing”. Ted Williams has a line of tackle of his own that is sold by Sears, not to forget that he was an avid lure collector himself. He was inducted into the IGFA hall of fame for his valuable contributions to the sport fishing world in 1999. 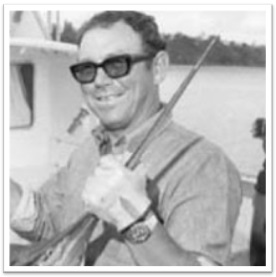 This Australian born fishing enthusiast is well known for his swimming career. But in the sport fishing realm he is better known as the Billfishing pioneer of Australia. He was the first to catch a black Marlin and then a blue and striped Marlin all falling under the rules and regulations of IGFA. He travelled for an estimated 350,000 nautical miles on his boat “Pannawonica” pursuing big game fish, mostly Marlins. He has caught over 22 Marlins weighing over 453 kg. Three fish that he caught weights over almost 589 kg and the largest weighed around 642 kg. As the word spread of Sir Garrick’s achievements the Australian waters started to gain more anglers from around the world. Sir Garrick is possibly the only angler known who has achieved such a feat in the sportfishing history. For the time and energy that he had contributed to the Australian sport fishing industry he has been honored by introducing a trophy under his name, the Sir Garrick Agnew Trophy that will be given to anglers who caught, tagged and released the most billfish in Australian waters. IGFA inducted Sir Garrick into their Hall of Fame in 2003 for his priceless contributions to big game fishing. 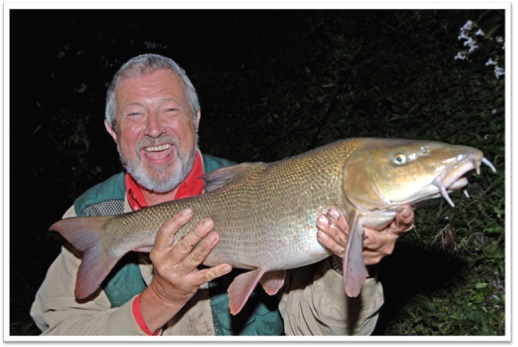 An angler for over sixty years, John Wilson is undoubtedly the best known angler throughout the British empire. He is honored with the title of “Greatest Angler of All Time” by the readers of Britain’s weekly Angling Times. In 1986 John began his television show “Go Fishing” that talked about various species of fish, fishing tackles and techniques. This show ran for 18 years bringing sport fishing to the living rooms of millions of viewers. John Wilson’s engaging personality in every paragraph of his articles and books, his tv shows and every personal appearance has inspired many to start fishing, countless others to reignite the love for fishing in their hearts and a lot many to venture beyond the local waters in search for bigger game fish. John Wilson has been recognised as the sole force behind the revival of sport fishing in the UK. He is honored by the IGFA by inducting him to the Hall of Fame in 2010.