Big Game Fishing sure is an adrenaline pumping sport. The thrill of getting hooked to a giant fish is beyond description. The fight for dominance and the exhibition of raw power is something that Big Game Anglers live for. Talking of Big Game fishing, have you ever wondered what are the biggest fish species that have been caught? Let me give you a glimpse of the the world’s largest saltwater fish catches.

The largest fish ever caught were Sharks, this is because the species can grow to large sizes when compared to other species. So we have created this list excluding the Shark species keeping in mind that not many sport fishing anglers will be targeting sharks for their amusement. 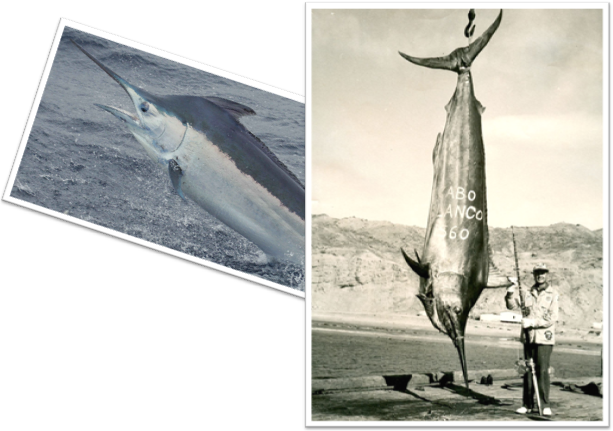 The sport anglers’ favorite, Marlin stands first in this list of the world’s largest fish. The Black Marlin is truly a magnificent creature. It is named the fastest fish on the planet owing to the speeds of 130 kph that it reaches in water. With a sword-like jaw and a strong will, the Marlin is the ultimate game fish that anglers target. These spectacular fish will dive deep once they feel the hook and when they surface, they plunge out of the water with great vigor that showcases its sheer power.

The huge Black Marlin that was caught off the Cabo Blanco waters in 1953 still reigns as the largest Marlin ever caught. It weighed over 700 kg, 707.61kg to be precise. The Angler was Alfred Glassel, Jr and he landed this Marlin through trolling using Mackerel as his bait. 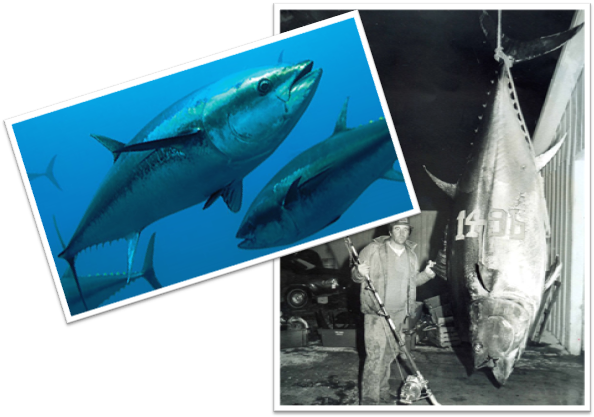 The Bluefin Tuna is not far behind, it is on number 2 in this list. Bluefin is a true fighter, they pull hard when hooked and fight till the end. They are powerhouses of stamina and don’t tire at all. If you hook up with a Bluefin you are sure to work up your back, legs and hands. These massive fish are yet another favorite of game fishing anglers for the absolute vigor with which they fight back.

The Bluefin that landed it in the top second position was landed in 1979 by Ken Fraser from Aulds Cove. This Atlantic Bluefin weighed a ginormous 678.58 kg. The technique that Ken Fraser adopted to catch this record Bluefin was trolling with Mackerel as the bait. 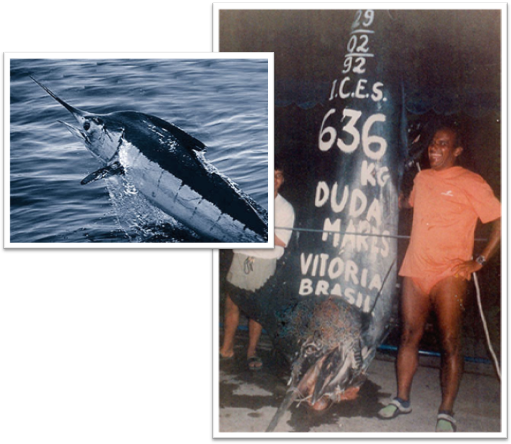 The Atlantic Blue Marlins are beautiful fish and are one of the largest fish found in the ocean. They are said to grow to lengths reaching up to 14 feet. These fish prefer to settle by the warm surface waters, though they sometimes take deep plunges into the sea to feed on squids. The great fight that a Marlin puts up when hooked is one of the top most reasons for it to be considered the holy grail by many sport fishermen.

One such fisherman was Paulo Amorim who caught the largest Atlantic Blue Marlin ever. This record breaking Marlin weighed 636 kg on the scale. The record Marlin was caught using a Moldcraft Lure by trolling from the waters in Vitoria, Spain. 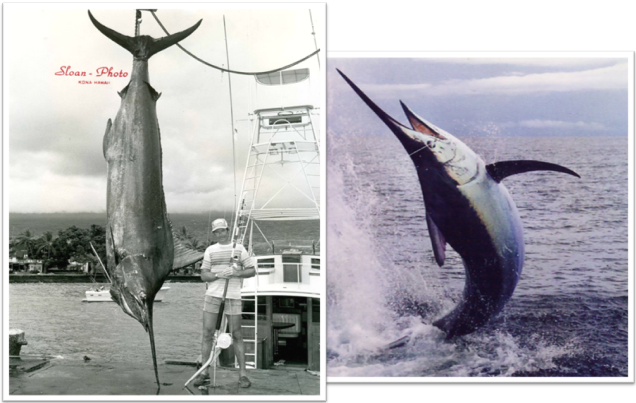 The largest Pacific Blue Marlin that was landed was from the Kaaiwi Point in 1982 by Jay de Beaubein. The Marlin was reeled in using trolling with Kita bait and it scaled to 624.14 kg. 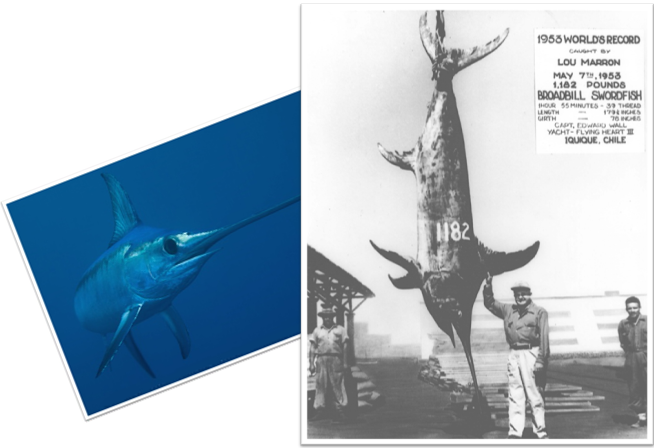 The Swordfish, also known as the broadbill swordfish or the broadbill is a very sought after game fish. Landing and releasing a Swordfish is considered as one of the highest achievements by big game fishermen. The Swordfish is a very fast swimmer and it puts up a  great fight when hooked. These fish are known to leap high into the water with great vigor in order to unhook themselves from the line. The swords can be quite dangerous but the dangerous defences that a Swordfish exhibits are warmly welcomed by adventurous anglers.

The largest Swordfish that was caught and recorded weighed 536.15 kg. Louis Marron was the angler who reeled in this gargantuan Swordfish from Iquique, Northern Chile in 1953 using trolling with a Bonito as the bait. 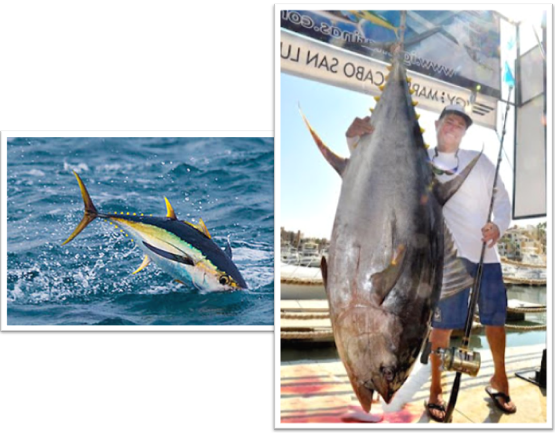 The Yellowfin Tuna is the most common favorite fish of anglers who indulge in sport fishing. These beautifully colored fish are known for their stamina and hard fighting nature. When you get a Yellowfin hooked on to your line you should know that you are in for a great fight. Found in the deep temperate ocean waters the Yellowfin lure anglers from around the world.

In 2012, Guy Yocom caught the largest Yellowfin Tuna that has ever been recorded. This huge fish that was caught from the waters of Cabo San Lucas, Mexico. Using a Melton rod and bait fishing with chunk Guy Yocom was able to land this massive tuna that weighed 193.68kg. 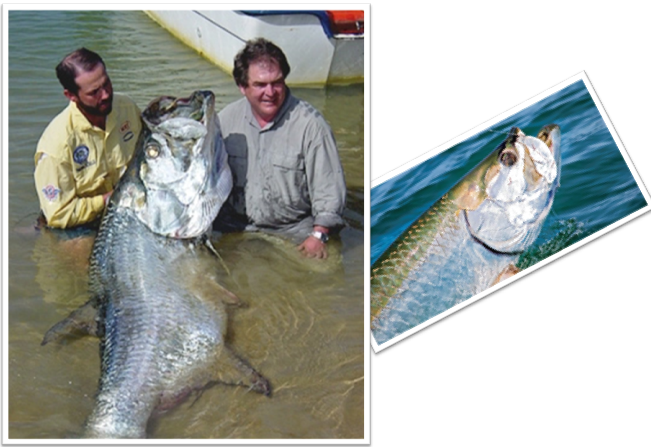 Next on the list is the hard fighting Tarpon. The Tarpon has been around for millions of years (fossils prove this fact) and hence is no ordinary fish. These efficient predators can thrive in both saltwater and freshwater. They can even survive in environments that are poor in oxygen supply owing to their unique air bladder. The size, the majestic looks, the mysteriousness and the hard fighting nature of the Tarpon makes it a highly prized sport fish.

Max Domecq in 2003 caught the largest recorded Tarpon that stands at an enormous 129.98 kg. This huge monster was fished out from the waters of Rubane. Max used mullet as bait with still fishing to land this record breaking Tarpon. 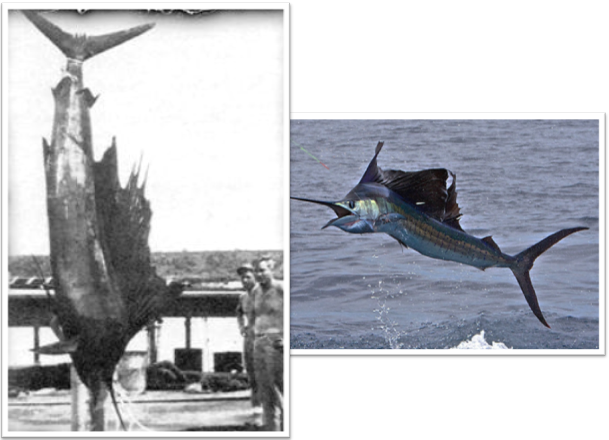 The Pacific Sailfish is found in tropical and subtropical waters. These highly esteemed sport fish are known for their power and grit. These fish are known to reach very high speeds of 110 kph in the water and are rightly called the cheetahs of the oceans. Once hooked to one of these monsters, they will plunge deep into the ocean with utmost speed. If you manage to bring them to the surface then they will leap from and dive into the water repeatedly making your arms ache with exertion. It can take hours before you land one of these magnificent creatures. Their sails and elongated upper-jaws are their most distinguishing features.

It was Carl Stewart in 1947 who landed the largest Pacific Sailfish ever recorded. A colossal Sailfish of 100.24 kg was pulled out of the waters of Santa Cruz Island Ecuador. 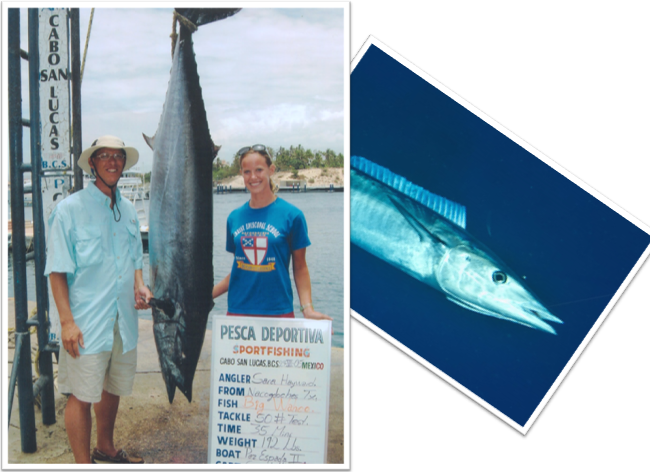 The next on the list is the Wahoo. These slender, torpedo fish are known for their fast runs that can reach up to speeds of 80 kph. The Wahoo is pursued by Big Game Fishermen owing to their persistent fighting nature and their ability to run off to larger distances in short time. Once you get a Wahoo hooked you will come to immediately because as the fish feels the hook on it, it will make the run of its life reeling out 100s of yards of reel in the wink of an eye. These fish fight vigorously by shaking their heads powerfully in an attempt to unhook themselves.

The biggest Wahoo ever caught was from Cabo San Lucas, Mexico and this world record is held by an avid fisherwoman Sara Hayward. In 2005 Sara reeled in a Wahoo weighing 83.46 kg using trolling and this record still stands undefeated. 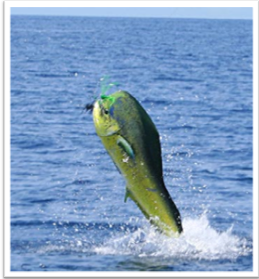 The Dolphinfish or Mahi-Mahi as they are popularly known is the last but not the least on this list of the Top Ten Fish Catches in the World. These brilliantly colored fish are one of the most sought after fish by game fishing anglers for their energetic fights and are highly prized for their meat. The Dorado is a fast swimmer and they are known to leap from the water repeatedly when hooked. Getting hooked to a huge Dorado can be exhilarating as these fish will put up a steady and powerful fight.

The world record catch of a Dorado was made by Manuel Salazar in 1976. He reeled in a gigantic Dorado of 39.46 kg from the Papagayo Gulf in Costa Rica. The method used in this record catch was trolling, with soft plastic squid.

One thought on “Top Ten Fish Catches in the World”