This began as the top fish the one and only fish that is considered the best by all anglers in the world. But I ended up arguing with myself when considering each one of them and ended up creating this list of the most sought after game fish by game fishing anglers. Each fish on this list for sure will rubberise your muscles and numb your legs once you get hooked with them.

Some of these fish monsters will be a tad bit meaner than the others, but in terms of fight and giving you an experience of a lifetime none would be a step behind the others. So, go ahead and find out why these top 10 were ranked the most wanted game fish by us. 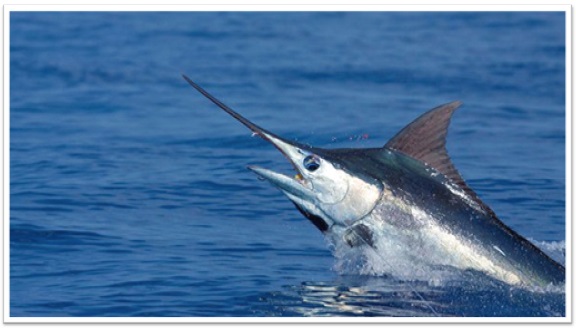 The Marlin is considered one of the toughest fish to catch. Be it the Striped, Black or the White, are all tough contenders of this position however, I am sure any angler would undoubtedly vote the mighty Blue Marlin as the toughest among the lot.

Anglers around the world consider hooking and releasing a huge Blue Marlin as one of the greatest challenges in the sport fishing realm. These Blues found in the tropical and warm temperate oceanic waters are usually pursued with 50 – 130 pound tackle to match with the unruly strength and stamina of these monsters. Trolling large baits is the most common method used to catch these sea monsters. Catching a glimpse of the bill of a Blue Marlin in the trolling spread is the beginning of all the fun. Once hooked, you will get to witness an amazing display of raw power (both energy and force) as the angry billfish of 100s of kgs goes airborne. This makes for one of the most unforgettable and cherished sights in a person’s angling experience.

The world record catch of a Blue Marlin, 624.14kg was caught by Jay de Beaubien in May, 1982 from Kaaiwi Point, Hawaii, USA 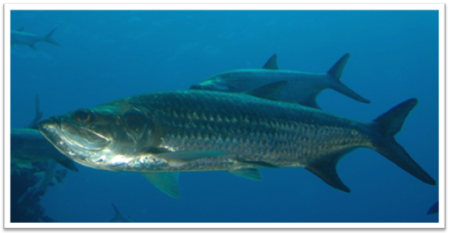 These glistening beauties popularly known as the Silver Kings are one of the first fish that was declared a game fish. These chrome plated fish that are found in the temperate tropical and subtropical water of the Atlantic Ocean are capable of gulping air.

The Tarpon is best known for its aerial acrobatics. These fish are hard to hook because of their bony mouths. Once you get your Tarpon hooked you can be sure to experience a dogged and spectacular fight. These magnificent fighters can leap 10 feet above the water. The Tarpon is usually fished using the still fishing method with live mullet, crabs, shrimp and pinfish. The feeding time in the night is considered the best time to catch these hard fighting, airborne fish. The best places to pursue record fish are Sierra Leone and Guinea-Bissau in western Africa. Here the Tarpon will weigh around 29 to almost around 90 kg.

The current world record in a Tarpon hunt is held by Max Domecq when he caught a Silver King weighing almost 130 kg from Guinea-Bissau in 2003, West Africa.

The Yellowfin Tuna like the Bluefin is also a hard fighter and hence is one of the most sought after game fish by sport fishermen. These bad boys of the oceans are strong and they have a high stamina that hardly lets them stagger on the other end of the line. These fish that are found in the warm temperate oceanic waters are mean fighters. They will fight till the end and will make you sweat till the moment you land it. These powerful fish are commonly caught using trolling with small bait like squid and other small fish. Artificial lures and strip baits are also used and at times chumming with live baits have also proved to be successful.

Yellowfin Tuna one of the favorites among the sport fishing folk and they travel to long distances to catch a glimpse of these truly amazing creatures and to hook them up. If you are targeting a Yellowfin then you should be prepared for the battle because the Yellowfin is no quitter. It will fight till you cut it loose or land it on the boat.

The world’s largest Yellowfin caught weighed over 193 kg and was reeled in by Guy Yocom from Cabo San Lucas, Mexico in 2012. 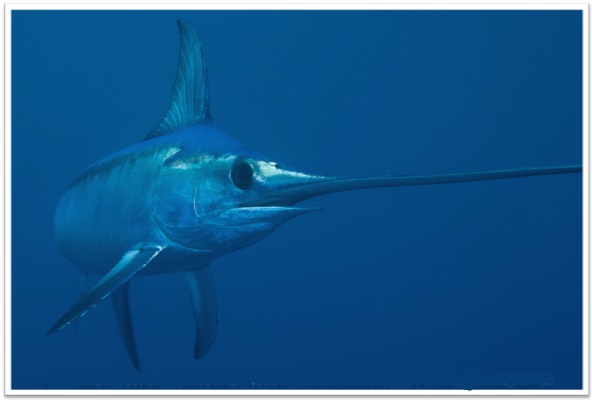 The mighty Swordfish is the next on the list. These amazing creatures with their sword-like bill are very popular game fish among anglers all around the world. They rank the highest in terms of stamina when compared to other game fish. The Swordfish are found in the temperate and tropical oceanic shelf waters. The usual methods used in catching Swordfish are trolling and deep drifting with baits like squids. These predatory fish are usually found in the deep waters however, they tend to swim to the surface for their night hunts when they are usually trolled out by anglers.

Landing the mighty Swordfish is considered as one of the highest achievements by game fish anglers.

The Swordfish that was caught by Louis Marron in 1953 from Chile that weighed slightly more than 536 kg still reigns as the world record. 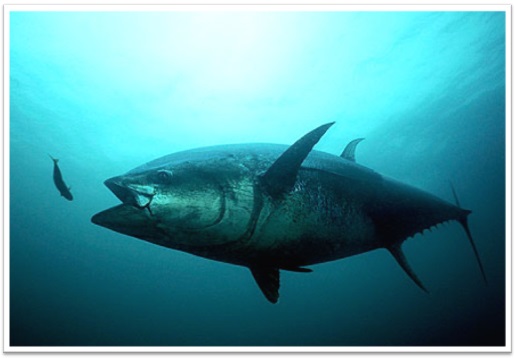 Tuna, be it the blackfin, the longfin, bigeye all are die-hard fighters, they just do not quit. The ones to top them all are the Yellowfin Tuna and the Bluefin Tuna of which Bluefin has a higher edge over the Yellowfin probably owing to its size. Bluefin is rightly considered the king of all Tunas. Their tapering body and the torpedo head make the perfect shape of one of the fastest fish in the world waters.

Hooking up with one of these monsters is both exhilarating and it will be a great deal of work. The Bluefin do not die out of stamina and they are known for making depth-bomb plummets into the sea once they feel the hook. Once hooked with a Tuna you can be sure that you are not going to get a second of rest until you reel the big boy into the boat. It is said that anglers who pick up battles with the Giant Bluefins often end up with back problems (back-breaking in every sense). The Bluefin Tunas are undoubtedly the raging bulls of the sea with their massive sizes and unparalleled power.

The Tuna weighing an enormous 678 kg, caught from the waters of Nova Scotia, Canada by Ken Fraser in 1979 is the largest fish ever caught as confirmed by the IGFA. 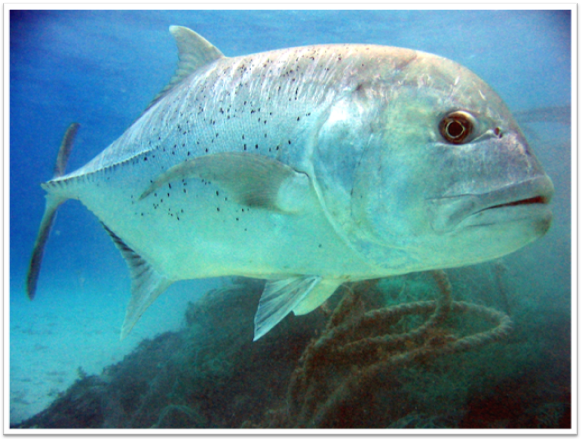 The name Giant Trevally is quite synonymous to powerful and brutal to anglers of the rod and reel. There are over 25 types of Trevally, all very hard fighters. But the mightiest fighter of them all is the Giant Trevally, commonly known as the GT. These beastly fighters attract anglers from around the world to destinations like Oman, the Andaman Islands, Australia, New Caledonia and Hawaii. The GT is one of the toughest fish that you can land with a rod and reel, not just because of their size but also because of their stamina to stay and fight. They are not tired easily and will fight till the end. This is one of the reasons that make them one of the favourites among game fish anglers.

The GT is said to attack poppers and baits with frightening power and they will demolish it before they are landed. Serious GT anglers use tackle of 80 pound that has a locked-down drag, this will help them to stop the monster from powering back over reefs. The largest Trevally caught on record is the one caught by Keiki Hamasaki in 2006 from Kagoshima, Japan. The GT weighed over 72 kg. 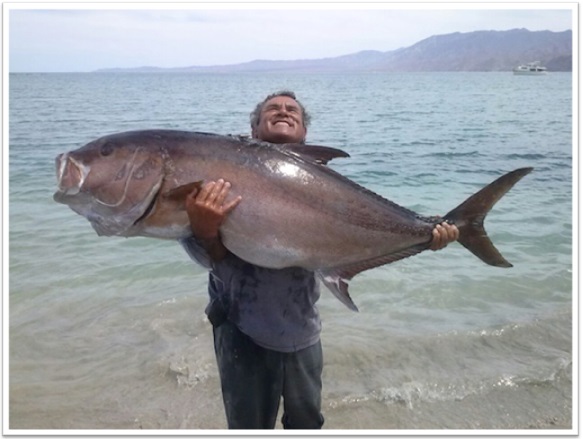 The Greater Amberjack is the next fish on our list of the most wanted game fish in the world. These fish are sought after by game fishing anglers for their ability to fight. They strike with lightning fast speed and often dive deep into the ocean once they get hooked. The Greater aMberjacks do not leap from the water but instead as and when it gets hooked it will head for the wreck, reef of rocky layers inside the ocean where it lives. If you did not stop them in time you can lose the fish there. To catch an Amberjack it is mandatory that you have a tight line that gives out line stingily. You will get stiff arms which should be forgotten else you can bid goodbye to your fish. The Greater Jacks fight with all might and they will dig and run as you try to lift them.

It is seen that once you hook and bring one Amberjack to the boat, others will follow it to the surface. Trolling with jigs, spoons, and strip baits is the best method to lure in a Greater Amberjack. The biggest fish recorded caught is a Greater Amberjack weighing 71 kg from Nagasaki, Japan by Hideyuki Nemoto in 2010. 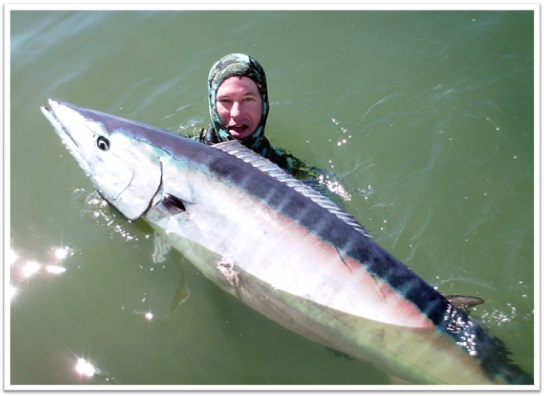 Just glancing at this fish will tell you that it was crafted for speed, they can reach speeds of 80 kph. And it is rightly defined when it was called torpedos with wings. Anglers call this the fastest fish in the sea owing to the hot first run it makes when on a tackle, these runs can reel out several 100 yards of the line in a matter of seconds. Also known as the Pacific Kingfish, these fish are found in the tropical and the warm temperate seas.

The Wahoo choose to settle near the wrecks and reefs where smaller fish are found in abundance. Wahoos are found to jump occasionally and they shake their heads violently when hooked in an effort to free themselves off the hook. Trolling is the most common method used to catch a Wahoo. Kite fishing and live-bait fishing have also found to be very productive in terms of wahoo-fishing. The Wahoo belongs to the Mackerel family and are highly regarded for their lightly grained sweet white flesh.

The record catch of a Wahoo was made by Sara Hayward from Cabo San Lucas, Mexico in 2005. The Wahoo weighed 0ver 83 kg. 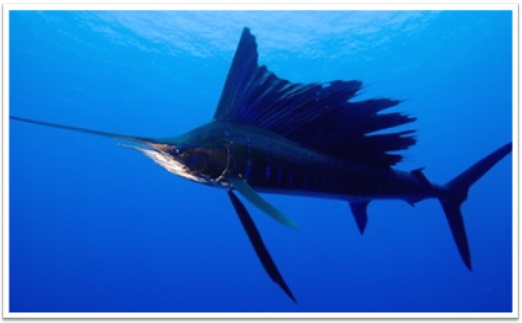 The Sailfish is certainly getting a place in this list. These beautiful creatures are found in the tropical and subtropical waters of depths 6 fathoms and more. The high dorsal fin (that looks like a sail) in these fish are one of their most outstanding features. The elongated upper jaw that forms a bill like structure is another of its distinguishing features.

The qualities that make the Sailfish a favourite among the saltwater anglers are their spectacular aerial acrobatics and their immaculate fighting abilities. These fish are fast, they have recorded a speed of 110 kph, the highest by any water organism. The fishing technique that are used in pursuing the Sailfish include trolling with strip baits, feathers and spoons and also live baiting and kite fishing.

The largest Sailfish ever caught, as recorded by the IGFA is the one landed by Carl Stewart in 1947 from the waters of Ecuador, the fish weighed a whooping 100 kg. 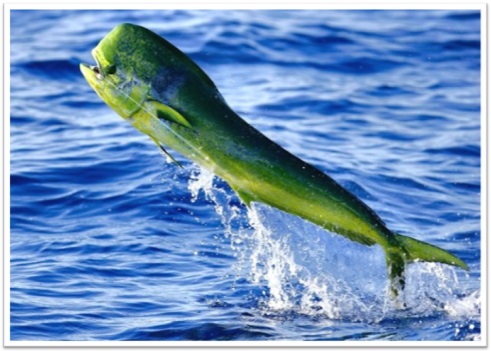 The Dolphinfish, as it is popularly known is one of the most sought after game fish by anglers all over the world. Their beautiful hues, blistering runs and their repute at the table all make them one of the top contenders of this list. These pelagic species are found throughout the tropical and temperate waters of the world. Dorados are extremely fast swimmers reaching up to 80 kph and take a high affinity to swim beneath buoys, logs, seaweed and other floating objects.

When targeting a Dorado the technique that will benefit you the most is trolling with surface baits like squids and strip baits. Live bait fishing and casting has also proved to be rewarding in case of Dorado fishing.

When a Mahi Mahi gets hooked it has a tendency to leap from the water in attempts to free itself from the hook. They will do tailwalks, dart in one direction and quickly enough dart in a different direction.

The largest Dorado caught until date was the one that weighed 39 kg caught in Costa Rica by Manuel Salazar in 1976.

2 thoughts on “The Top Ten Game Fish in the World”